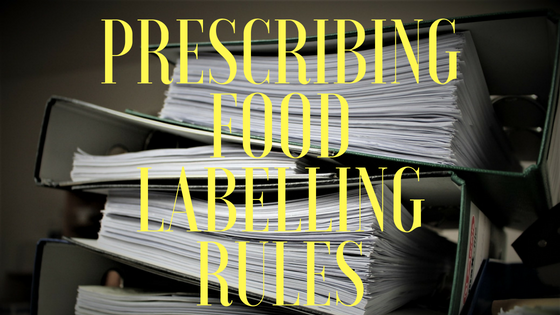 Our discussion on food labelling modernization often uses the terms “prescriptive” and “prescribed” to describe the evolution in how regulations govern food. Not only are there more labelling requirements today than a few decades ago, but the expectations of how information is to be stated and presented on a food label is also more detailed.

The new ingredient labelling rules under the Food and Drug Regulations (FDR) are a great contemporary example of “prescription.” It’s no longer sufficient to simply present a list of ingredients distinctly on a label. The ingredient list must now be presented in black or equivalent to a black type, on a uniform white or neutral background with no more than a five-per-cent tint in colour. It must be clearly differentiated by using a surrounding border, shading or lines above, below and to the sides. The list must be in a sans-serif font, and it should feature the heading “Ingredients” in bold. The use of upper and lowercase letters, along with punctuation in commas or bullet separators, are dictated by the FDR. So too are the letter heights, use of condensed type and line spacing, which can depend on the nutrition facts table (NFt) format used.

These are the “prescriptive” rules that define how information is to be presented. There are even more rules that govern how ingredients are named, what ingredients must be declared, and those that are exempt from declaration. Add in allergen, gluten, sulphite and precautionary labelling, and even more rules apply.

Health Canada and the CFIA will be rolling out more food labelling modernization initiatives over the next year or so. Among these is front-of-package nutrition information, which focuses on high amounts of saturated fat, sodium and sugar. Such labelling will not be pretty, nor will it be without prescription. The CFIA’s modernization focus is on enhanced prominence of mandatory information, including the common name. Currently, a common name must appear on the principal display panel in a type height no less than 1.6 mm, and must be clear and discernible. New rules might consider a type height related to the minimum required for the numerical portion on the net content declaration, or perhaps in a type reasonably related to the largest on the main panel.

Existing rules on highlighting ingredients present in a food, or the presence of natural or artificial flavours, are virtually silent but are particularly focused on prepackaged consumer foods which include an image on the label of ingredients like meat, fruit or vegetables when the food actually contains a related artificial flavour. In the latter case, and depending on the placement of the pictorial representation, the name of the food or the image must be shown to be artificially flavoured. CFIA’s modernization might consider rules similar to those in the U.S., whereby the flavour and the name of the food are identified as being flavoured or artificially flavoured, when a primary recognizable flavour is highlighted by words or pictures.

n the future, the requirements for presenting label information will be even more “prescribed.” Much of Canada’s food labelling modernization will coincide with the end of the five-year transition period (Dec. 14, 2021) granted for the new ingredient and nutrition labelling rules. The scope of federal food labelling modernization will involve the FDR, as well as the Safe Food for Canadian Regulations (SFCR), which still have to be finalized but which are anticipated to come into being this year. The speed at which regulations in Canada are created and amended is measured by years, so it may be almost a year by the time proposed regulations are in place.

The CFIA will also introduce new amendments to the Agriculture and Agri-Food Administrative Monetary Penalties Regulations (AAAMPR), which were published in October 2017. Administrative monetary penalties, or AMPs, can be issued by the agency for labelling deficiencies under the SFCR recognized in the AAAMPR. AMPs are kind of like traffic tickets – they will cost you money for foods that are not labelled in the “prescribed” manner. Selling a prepackaged food with a label that doesn’t bear the “prescribed” information is considered “very serious.” Selling a consumer prepackaged food with an added flavouring ingredient that is not included on the label in the prescribed manner is considered “minor.” Under AMPs, minor violations will cost about $500, whereas very serious violations will cost between $1,500 and $10,000. The term “prescription” will soon start to flex its muscle and demand respect.

Gary Gnirss is a partner and president of Legal Suites Inc., specializing in regulatory software and services. Contact him at This email address is being protected from spambots. You need JavaScript enabled to view it.

Subscribe to Legal Suites® News and get the latest on the following:

US Food Labelling Under the FDA

A Case of Uniform Compliance

The Danger of Warning Labels

Food labelling — Where do we go from here?

Food Suite® Canadian Bulletins provide subscribers food compliance news they need to know. Follow this link to see for yourself.

The Food Suite® Reference Manual to the Food and Drugs Act and supporting Smart Tools is changing compliance research for the better.